Twirl Girls at the 2015 Emmy Awards in Denver!

Twirl Girls takes home a trophy!  Congratulations to Taylor Stein, who won Best Director at the 2015 Emmy® Awards for the Heartland Chapter of the National Academy of Television Arts and Sciences!  (Also, congrats to Curtis Grubb on his nomination for Musical Composition/Arrangement!)  Below are some photos from the event and a quick letter from Taylor.

(If I was allowed to give a speech at the awards gala in Denver, it would’ve went something like this…)

As promised, I’ll make this long and elaborate.  Initially, I want to extend my heartfelt thank you to the people involved with this project.  As I’ve said before, there are too many to name without it feeling like the credits of the movie.  (Another reason to watch Twirl Girls!)  But, I would be remiss if I didn’t at least mention the following: my fellow executive producer, Steve Mattern, who got onboard with the idea at a very fateful sushi brunch and whose friendship made the project a true joy to work on together; Sue’s Stepper-ettes, a.k.a. the baddest baton group on the planet; every member of the Foehlinger family, past and present, who trusted us with their “baby” and let us tell the story that they live everyday; “Alice” Senior Twirling Corp., who welcomed us with open arms, whether or not they were having a good day of practice (and especially those of you we followed around for extended periods of time!); Curtis Grubb, for creating some brilliant music for the film; my sister, Courtney, for lending her beautiful voice to that brilliant music…for free; Nate Gasaway for his added photography and editing skills (and being smart enough to get out before he got too involved and realized it was going to take up all of his time for literally years); all of the people down at NET, but especially David Feingold, Terry Dugas, Joe Turco and Kay Hall for helping us get the show on the air and nationally distributed; my parents, who always told me I could do anything…and have watched me try to do everything; and last but not least, my wife, Keegan.  I can honestly say, if it wasn’t for her this documentary would never have happened.  Originally, my plan was to put together a little video for her to enjoy her last baton “hoorah,” and…well, I just can’t make little videos anymore.

Boy…I can see how these Emmy speeches get away from people.  You want to thank everyone and you have 20secs before the orchestra starts playing.  Well, hopefully you’re a fast reader.  –  Taylor 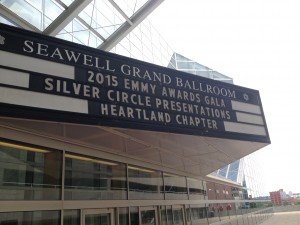 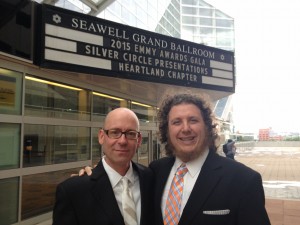 Curtis and Taylor outside the gala. 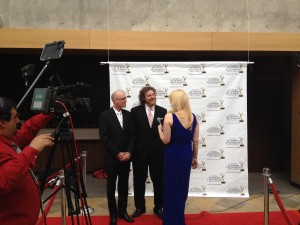 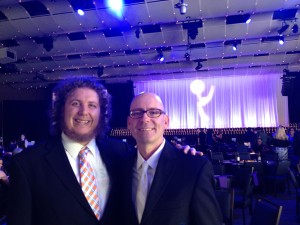 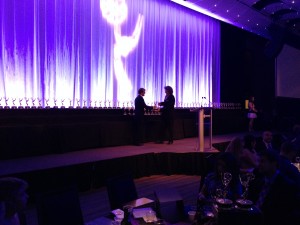 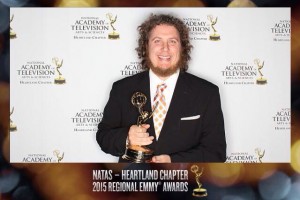 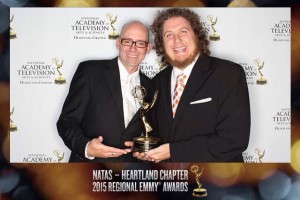 Curt and Taylor posing with Emmy.